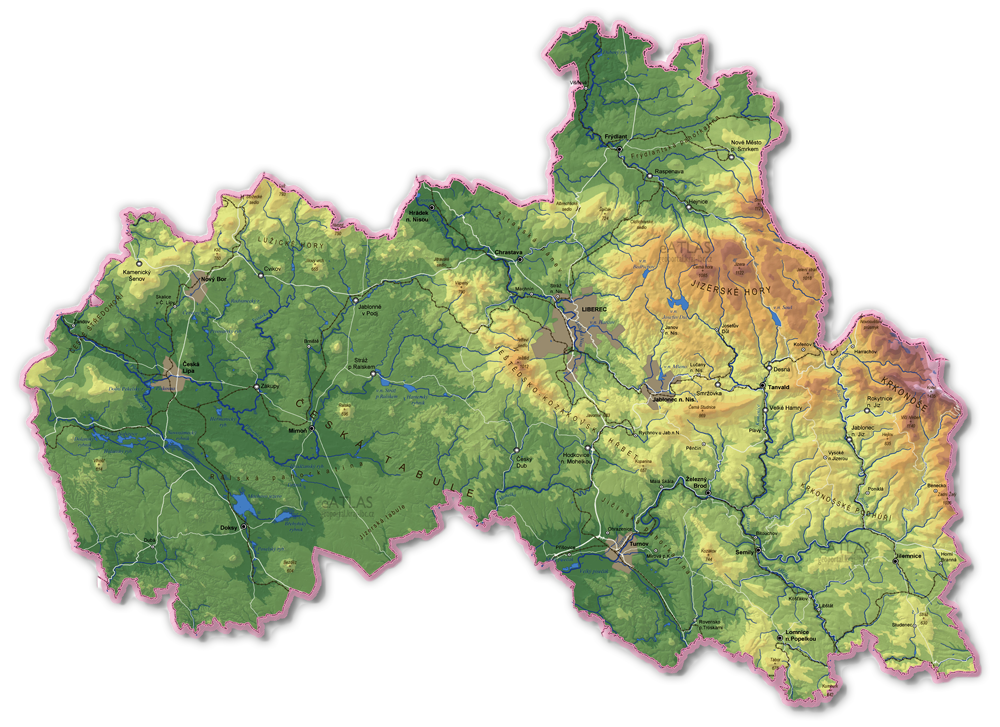 The Liberec District is situated on the north of the Czech Republic. The area includes the north of the Czech basin, Jizera Mountains, the western foothills of the Krkonoše Mountains, and the eastern part of the Luž Mountains. Its northern edge forms a 20 km state border with Germany, followed by a 130 km long border with Poland. The eastern part of the district is adjacent to the Hradec Králové District, and is adjacent to the south with the District of Central Bohemia and to the west with the District of Ústí.  It is among regions with a higher proportion of children and lower proportion of older people.

The district has a predominantly industrial nature. The glass and jewellery industry, the production and processing of plastics, engineering and processing industries are primarily developed with close ties to the production of cars. The traditional textile industry has lost its dominant position due to the slowdown in recent years. The Liberec District has much to offer in the field of study. The presence of universities in the Liberec District must thus be mentioned. The Technical University in Liberec has a Faculty of Engineering, Textiles, Economics, Pedagogy, Architecture, Mechatronics, and Interdisciplinary Engineering Studies. Furthermore, the youth have the opportunity to study at many secondary schools (grammar schools, secondary technical schools, secondary vocational schools, integrated grammar schools, and special schools).

The Liberec District offers outstanding natural and cultural conditions for tourism, both in the winter (alpine as well as cross-country skiing – Krkonoše, Jizera Mountains, Ještěd ridge, but also the Luž mountains) and in the summer. Practically any activity is available for summer tourists – walking and cycling (in both the mountains as well as low-lying areas – e.g. the former military training area of Ralsko), mountain climbing (rock-ribbed cities in the Bohemian Paradise), bathing (Mácha Lake, water flows), urban tourism (Liberec, Turnov, Frýdlant in Bohemia, Jilemnice, etc.), and heritage sight-seeing (fortresses, castles, urban conservation areas, rural heritage reservations and zones).  The most popular fortresses and castles are Bezděz, Zákupy, Lemberk, Frýdlant, Sychrov, Hrubý Rohozec, and Valdštejn. Spas also play an important role and are often sought by foreign visitors. Its rich cultural and historical tradition is reflected in its large number of historic buildings and monuments and cultural facilities, and lures hundreds of thousands of visitors to the region annually. The unique structure of the Ještěd hotel has become a symbol for the region at large, which received a Perret’s prize.

The rich cultural and historical tradition of the district is reflected not only in the large amount of historic buildings and monuments, but also in the cultural facilities. The North Bohemia Museum in Liberec, the Regional Gallery in Liberec, and the Liberec District Research Library are among the institutions of national importance. Major cultural institutions also include the Theatre of F. X. Šalda with the Small theatre and the Naive Theatre stage in Liberec, the Zoo and Botanical Garden in Liberec. Cultural facilities with regional significance include many museums and galleries in various parts of the district. Following in this district’s tradition of glass and jewellery, visitors may view e.g. the Glasswork museum in Nový Bor, Kamenický Šenov, and Železný Brod, and the Museum of Glassworks and Jewellery in Jablonec nad Nisou. The Museum of the Bohemian Paradise in Turnov houses collections from the field of geology, mineralogy, and documentation of gold- and jewellery production, which are unique not only in the Czech Republic, but also in Europe. Libraries and their branches in lower territorial units are equally important.

The Neisse-Nisa-Nysa Euroregion also extends into the Liberec District. It consists of three border areas located on the territory where the state borders of the Czech Republic, Germany, and Poland meet. The territory of the Liberec District is thus an integral part of the Neisse-Nisa-Nysa Euroregion, which was established in 1991.